Some timeÂ agoÂ IÂ came into possessionÂ of aÂ smartphone, cheaperÂ it is true,Â butÂ it does its job.Â The thing that attracted me to it it’s Android,Â at that time was versionÂ 1.6,Â and as a Linux userÂ I had some pleasure toÂ do someÂ testsÂ withÂ this acquisition. 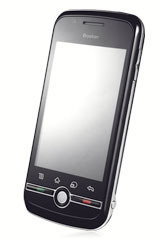 As in title this smartphone was bought from Orange and it has a custom Android default image based on Android 1.6 . Technical features are displayed here on the opearator site. I’ve expected them to make an announcement about an upgrade to the operating system and finally the ad appeared on the Orange site and they recommended upgrading using software that can be downloaded from here. I did the upgrade according to the specifications and I’ve had no problem.

I thoughtÂ thatÂ requires some reinstall …Â and IÂ startedÂ looking forÂ alternativesÂ thatÂ might workÂ for me.

Important: Before you start, I do not takeÂ responsibilityÂ for any loss, damaged materialsÂ such asÂ phone, computers etc.Â InÂ anyÂ ROMÂ updateÂ softwareÂ you must ensureÂ continuity ofÂ supplyÂ of electricity toÂ the appliances concerned.Â It is preferableÂ even aÂ UPSÂ or alaptopÂ batteryÂ isÂ full.Â The phoneÂ must be “energetic”Â orÂ evenÂ over 50%Â battery level.

DON’T DISCONNECT CABLES DURING OPERRATIONS BELOW!

First IÂ foundÂ that I couldÂ make some upgrades using these tools:

These three “tools” have to be downloaded to your computer.Â The first is an application that runs only under Windows.Â I didn’t found something to do the same under Linux, so the operations will need Windows (XP, Vista, 7).

After downloading the three files installÂ  “SUT LR” as a regular Windows program (double click, next, next, next, finish), I don’t understand exactly what it does and as a Windows user I should not beÂ to know the install : D. Also unpack files from the other two archives to known locations (Desktop or My Documents).

After installing on the computerÂ  ofÂ  SUT LR we have to do the following:

* Note: DO NOT REMOVE THE CARD PHONE DATA

– Turn phone into “Recovery Mode” by clicking on the row:

and the display should appear at the top “* FLASH * FROM RECOVERY BOOT”.

– Connect the USB cable to the computer and then to the phone.Â At this stage Windows should start to see new hardware and begin to install the drivers automatically.

Back to SUT LR :Â  Click “Next”, then select the file ending in .nb0 from the first archive that you downloaded (Hipi1_6_2.nb0).

-It will appear a new option in the program “Update Option”.

Do not forget to select the option “Enable “Fatal Error Option “” then click Next.

-The new software will automatically install automatically on your phone.Â When ready, the message “Update process is completed successfuly.”.Â Click Finish and disconnect the phone from the computer.

Now you have the software installed Apanda 1.6.2 which is actually a custom version of 1.6.2 and Android phone at this stage is unlocked, meaning it can operate in any network.Â But this software is a version that starts in Chinese and English can change (bottom right button) but this is not necessarily becauseÂ  we want do an upgrade to this operating system.Â Once the phone lights up (image appears with Android)Â  close the phone by pressing the power button or remove the battery if it does not work.

-Turn on the phone in Recovery Mode

-Connect data cable to the computer (if not already connected) and then the phone (no longer installed because drivers were previously installed).

Back to SUT LR:Â  Click “Next”, then select the file .nb0 from the second archive that you downloaded (Bakpia-2.2.1-radithTux.nb0).

-It will appear a new option “Update Option”.

Do not forget to select “Erase User Data” and click Next.

-The new software will install automatically.Â When ready, the message “Update process is completed successfuly.”.Â Click Finish and disconnect the phone from the computer.

The phone will automatically restart with the new software version Bakpia – 2.2.1.

Bakpia version – 2.2.1 is a custom version of Android 2.2.1 and meets my needs.Â Changes the type of my device, the software is actually from Motorola, but I don’t have a special problem with this little detail.

At first showed signs of weakness in that it began to close the default applications running in it, some of these applications I removed without much thought for the deal ofÂ  RAM.

I stopped the animation and special effects, have changed the application of Home with my favorite “Live Home” and then I installed my desired application.

Unlike version 1.6 and 2.1 now my phone turns easily into an Access Point (WiFi Hotspot) and USB cable and WiFi connection.

I’m notÂ  conditioned by the existence of a WiFi network (a router) because of those options above.

Another feature that impressed me is that it is rooted, that I have access to system files and also have option of installing and using App2SD applications.

I’m very pleased with my device now.Â I wish you success !

I have to mention again that I do not respond to any problems you have if you follow the steps described by me.Â If you have reservations please do not consider those written above!

Permanent link to this article: https://www.xenno.org/926/orange-boston-updated-to-2-2-1-and-rooted/